The Piggin' range of figurines are all modelled by renowned artist David Corbridge. The first Piggin pigs appeared in 1993 and were produced by Collectible World Studios until 2006 when Xystos took over the range. The Piggin' Club started in 1994 and enabled members to receive club pieces, pins and news. It ran from 1994-2006 and was re-introduced again in 2007. 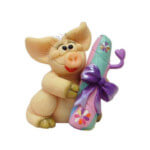 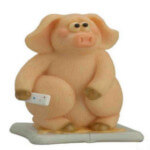